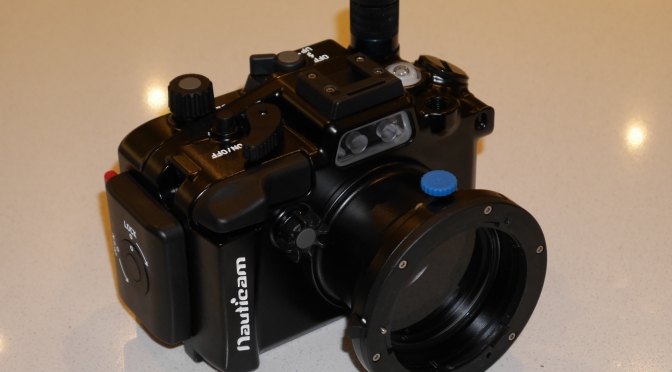 2015 has probably been the first year where consumer devices have taken the journey to 4K as even iPhones now can record at Ultra High Definition.

However there is still a very long way to get us to the level of standardisation of HD video and the war of the codecs has still to determine a winner.

As of January 2016 if we consider only digital cameras only three manufacturers produce 4K capable devices that can be housed for underwater use and those are Canon, Sony and Panasonic.

Specifically we have two compact cameras with fixed lenses, the Sony RX100 Mark IV and the Panasonic LX100, two micro four thirds the Panasonic GH4 and GX8 and three DSLR the Sony A7IIR and A7IIS and the Canon EOS-1D C that was in fact the first camera to record 4K video in 2013.

From a consumer point of view we are interested in a 4K device that can operate with wet lenses across the focal range and that is under the $5,000 mark including the housing so I will focus on the Micro Four Thirds and fixed lens compacts and exclude immediately the Panasonic LX100 that requires a port system to operate we are now left with 3 devices that today are the real options for 4K underwater video.

4K Digital Cameras for Underwater Use

I have added the lenses of choice of each camera for convenience.

In 35mm terms the focal lengths offered by the 3 devices are:

Both Panasonic cameras revert to a traditional 35mm cameras when the 4K crop is applied. The wet lens of choice is therefore the old Inon UWL-100 with M67 thread. This is a lens with a magnification of 0.57077 that with the 14-42mm II Mega OIS and Macro Port 35 or the 12-32mm and Macro Port 29 performs very well without vignetting and offers zoom through the whole focal range. The same lens appears to work fine also with the Sony RX100 Mark IV but is almost border line in terms of vignetting and I will need to conduct further experiments for now we will refer to the Inon UWL-H100

You can see that the GX8 and the RX100 are virtually equivalent and the same holds true for macro with the GX8 and the RX100 offering same working distance and magnification. The GH4 is superior in this area due to the longer focal length after crop of 105mm. For me the most versatile wet lenses for macro remain the Inon UCL-165 despite the various Nauticam and Subsee options because you can cover all the working distances from 16cm to 8cm which is the sweet spot for macro work.

Unfortunately the level of magnification obtainable with the GX8 and RX100 is not great and really small subject will still look tiny in the frame. Obviously the use of the 14-42mm lens on the GX8 resolves all problems except the field of view with wet lens at wide end is now 21mm anyway not a huge issue.

I am still waiting for a proper review of the GX8 but in terms of 4K resolution I have been impressed with the Sony RX100 Mark IV that appears to be sharper than the GH4 and even the A7IIR.

In terms of 4K recording all devices on the market use some form of H264 100 Mb/s codec Sony uses what they call XAVC S while Panasonic uses a standard Mp4 compatible wrapper. Sony codecs do not use B frames in their H264 implementation but this does not seem to affect quality that much.

So now that you have your 4K footage what do you do with it?

The first consideration is that all cameras record internally at 8 bit with 4:2:0 subsampling this means that colours are only recorded for 50% of the pixels and then interpolated. The implication is that color grading opporunites are limited and heavy manipulation should be avoided to avoid undesired effects such as banding.

This means custom white balance better with a filter is still very much needed for 4K.

In the Mac camp there are many consumer options for 4K editing including iMovie, Final Cut Pro X, Adobe Premiere Pro and for Windows you also add Sony Vegas, Avid composer and many more

S-logs or V-log are also not meaningful at 8 bits without external recording capabilities as grading will ruin the footage.

Workflow for Consumer Use on Mac

For the average home user on a Mac iMovie offers now decent functionality and imports and edits in native format all the clips produced by our selected cameras. iMovie also exports in Prores 422 which is ideal for storing your master copy after editing.

Unless you edit on a laptop or a machine with poor hardware there is no need to convert the footage in intermediate formats as most of GPU have H264 acceleration so your 4K workflow will look like this:

Step 6 is particularly important as none of the above mentioned editors has good native export capabilities so you want to do that with another program. If we take for good what apple says Prores HQ is very rarely fooled by 4K footage at 737 Mb/s for 25p. Consindering that our footage was 4:2:0 to start with this means we need only 75% of that bandwidth or 552 Mb/s. As Prores 422 records at 492 Mb/s which is only 11% less than the required bandwidth so iMovie with the Prores export option is pretty good.

We now have our 492 Mb/s video with most likely an AAC audio what are we going to do with it?

This is where it gets really painful. If you have a 4K Tv you definitely want to watch your footage on it, today UHD Tv support the HEVC codec and more recently also the VP9 codec that google uses in YouTube however both those codecs have limited options for encoding and do not have any hardware acceleration support in your computer that will be used to compress the footage.

To make matters worse if you then share your footage online on YouTube this will be heavily re-compressed. I have done some analysis on some clips that I watch to find that 4K bandwidth is between 17 and 20 Mb/s in H264 and the files are not even encoded with CABAC to ensure they can be played on devices with limited hardware capabilities. In terms of web browser many now supports VP9 however hardware acceleration is lacking so it is likely that you will be watching H264 4K footage at 18 Mb/s when you connect to YouTube on your computer.

It is likely that the mp4 files that you can produce with handbrake or other tools are easily coded at 60-70 Mb/s so YouTube, as it does with HD footage, will introduce significant issues to your 4K videos.

Interestingly the 4K bandwidth is higher in terms of Bits/(Pixel*Frame):

This would suggest that 4K videos are less compressed but on the other hand the compression is less efficient. 2K appears an interesting mix that still uses Cabac and 3 reference frames but is really a computer only option.

The options that differ are ref=5 otherwise we break the limit of level 5.1 and the decoder may have issues, and crf=18 from 23 to increase quality.

This H264 encoding can easily produce files around 1.4 Gb for just 3 minutes and will require playback on the device or USB disk attached or a good cat 5 ethernet network or solid wireless at at least 100 Mb/s effective speed.

It follows that H264 really is not the way forward at 32 Mb/s HEVC two pass or crf=23 in single pass you get files that are 20% or less of the size and work well if you have a 4K HEVC accelerated player like I do. At this bitrate is also very easy to stream over your wireless LAN even at mediocre quality. Unfortunately YouTube will reject your HEVC files and require H264 or VP9.

Google did not want to incur more royalties so they pushed out HEVC to use the open source VP9 as they did years ago with Vp8.

VP9 is at least in the Mac version very slow and seems fairly amateurish. They have been succesful with Android Tvs that have YouTube as a prime source of 4K content because the YouTube app does not work in 4k on Tv sets unless it can decode VP9. This is clearly only a commercial plot as all TVs can play H264 and YouTube wants to reach as many people as possible with 4K therefore keeping bandwidth below 20 Mb/s and accessible to the higher end of DSL connections not just fiber so that they can push their ads to the masses, however it also means that your video will look pretty pathetic on YouTube unless  you use a VP9 capable browser or Tv set or android to box to watch it.

At time of writing the only android box that can decode Vp9 is the Nvidia Shield Tv so if you want to watch YouTube 4K videos at 18 Mb/s Vp9 there is at least one choice.

2 thoughts on “The painful quest of 4K Video”

The King...just a few weeks and red deer will lose their antlers to get new one in preparation for the mating season...
Looking for prey...it is time for birds again. I love red kites for me the most iconic British bird of prey
The two amigos...I see those two guys arguing all the time it has given me the opportunity for some great pictures and videos!
Eye to Eye...probably one of the last images before the red deer will loose their antlers to prepare for the new mating season in November
Sunset rut...first outing with my new Panasonic Lumix S5
Better days will come...
%d bloggers like this: