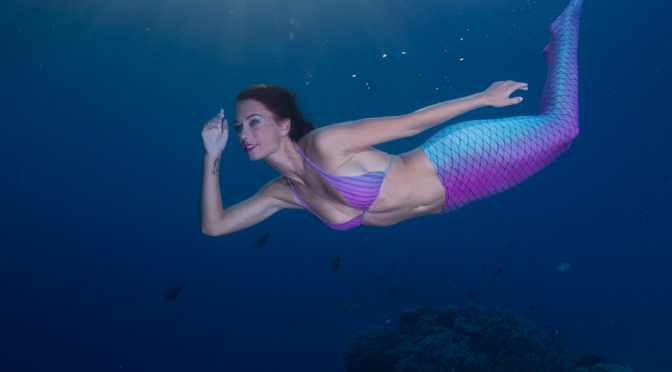 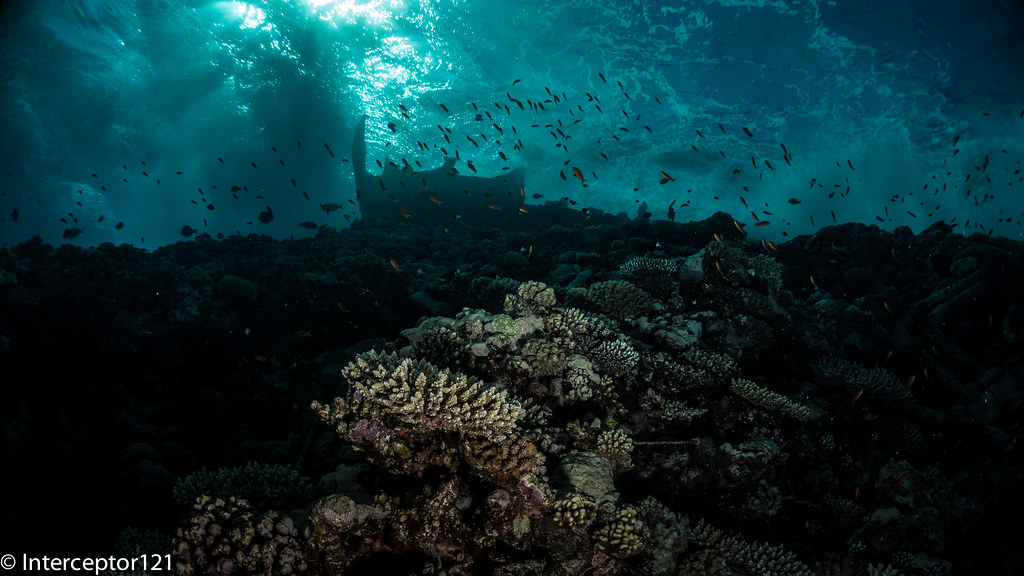 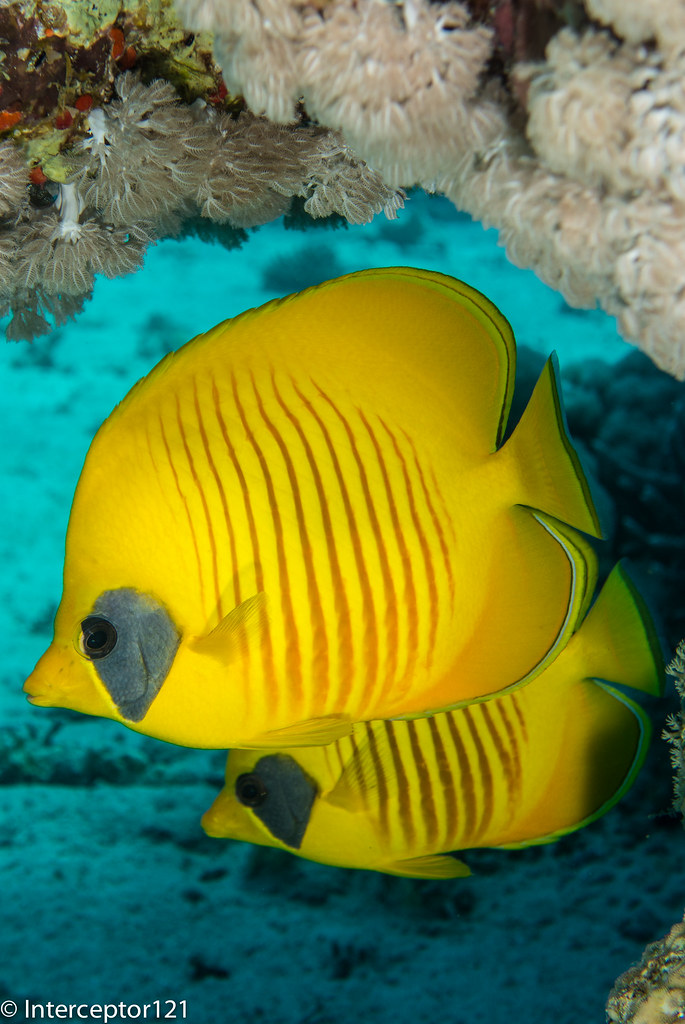 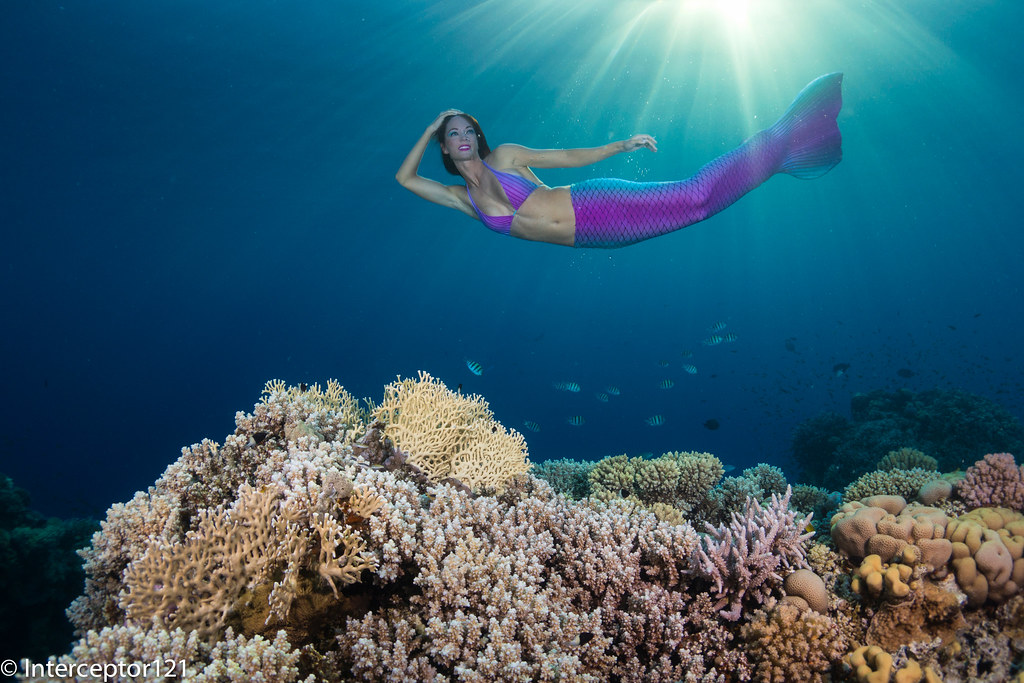 On the early morning of Day 3 we left the Thistlegorm for Ras Mohammed.

Dive number one would have been on Ras Zahatar, this dive site has some great opportunities for sunburst shots in the early morning but generally not a lot of fish as the location is quite sheltered and there is never too much current that I recall.

There are also some very nice gorgonian fans around the 22 meters mark however as soon as we jumped in it was clear it was going to be a competition to have some of it. Besides not having made clear arrangements for modelling with anyone it was going to be a quite technical session.

Since the arrival of digital sunburst shots have proven to be problematic for DSLR and mirrorless users. The issue is with the sunball itself there is an issue of highlights when you try to shoot a coral reef with the sunball in the frame and you are using a shutter speed of 1/250th or 1/320th that are typical DSLR sync speed.

Mirrorless cameras do even worst as usually the base ISO starts at 200 that makes it really difficult to capture this shot.

So the key is to put the sun behind something or have the rays in the frame but not the sunball. Something like this to give an idea 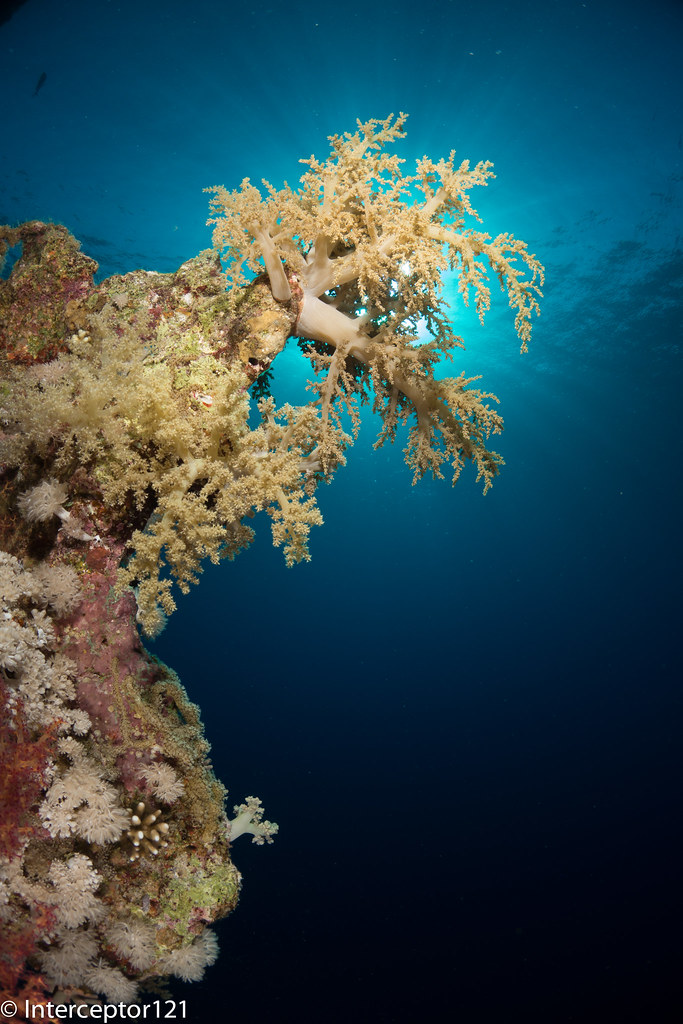 The sunball just behind the soft coral gives a nice glow so even with a 1/250th shutter and f/8 at ISO 100 is possible to capture a captivating scene.

Few meters away there is a gorgonian with a red soft coral on top that is really exciting to see at naked eye. To me this reminds of a frogfish head profile. It is impossible to capture this scene at 1/250th f/11 ISO 100 it is just too bright you need to reduce at least two stops to get the sun properly however if you did that on a DSLR you would be shooting at f/22 and it is near to impossible to properly illuminate the coral with your strobes at the distance required.

That is where our RX100 compact comes to help as you can sync your strobes at 1/2000th this should give a black background around the coral, the coral properly lit in the foreground as I had the strobes at full power and the sunball in the frame as well without too  many glowing highlights, this is the resulting shot 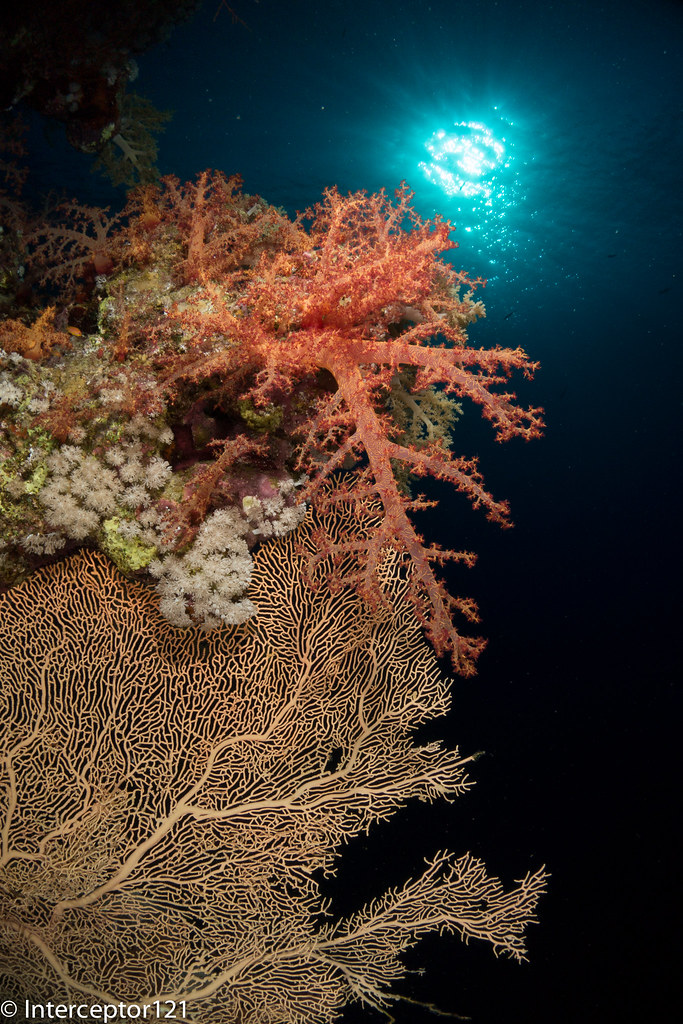 Note that a model would not be visible in this shot and fish would be colorful only in front of the coral or close by anyway as discussed there was not fish to model for me and this was just technical entertainment. The image is quite strong but the lack of fish makes it less interesting. 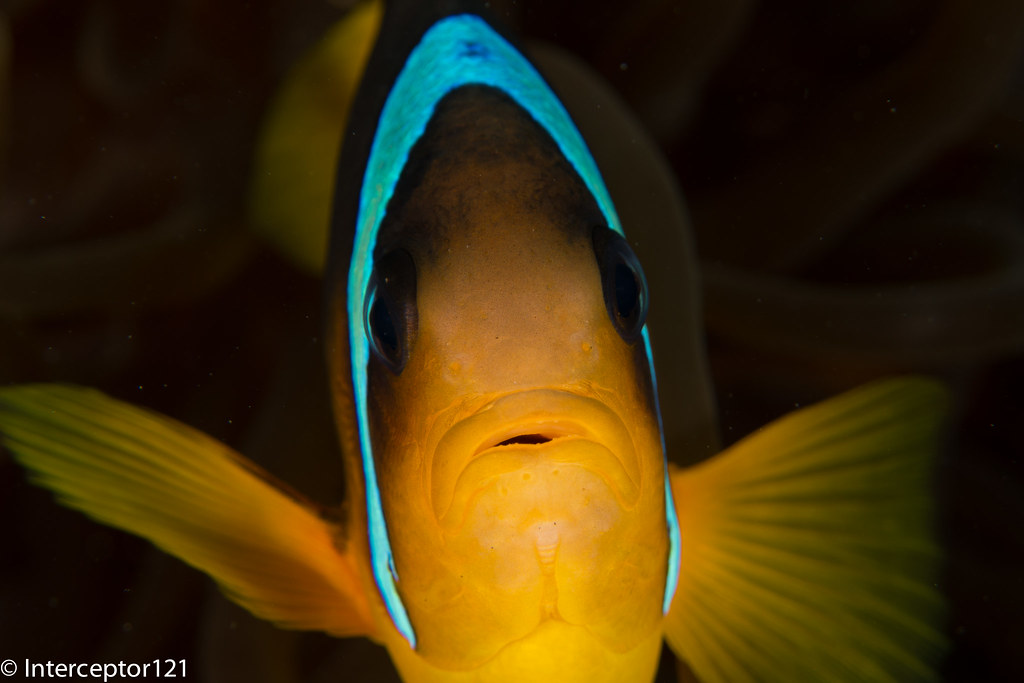 This is taken with a single Inon UCL-165 a luxury of having a compact and being able to wide and macro on the same dive.

Anyway I was happy with the sunburst in the frame so that dive was well worth it.

Dive two was at Jackfish Alley, and proved to be the most entertaining of the day. Who knows this dive sites knows that there are two caves, the first is wide but very dark and at certain times has turtles inside. The second is really narrow but has few cracks the provides a cathedral light effect best experienced in other site of the Southern Red Sea. Anyway we got the briefing and Dr Mustard was going to be marshaling the queue of photographer in cave number 2.

Being familiar with the dive site I knew that cave 2 is quite narrow even for normal diver let alone this big troupe of photographer so I mounted my tripod legs on the tray with a view of working in cave 1 and then move to cave 2 after the chaos was over.

Well it was real chaos as you can see from the feature image divers in the way, bubbles silt, in short it was a mess.

So I spent some time in cave number 1, this cave is really dark and you can’t really shoot handheld. In cave number 2 you can use speeds of 1/25 or 1/30 up your ISO  and put the camera on a rock whilst you take the shot, in cave 1 this results in darkness unless you go to 4 digits ISO. 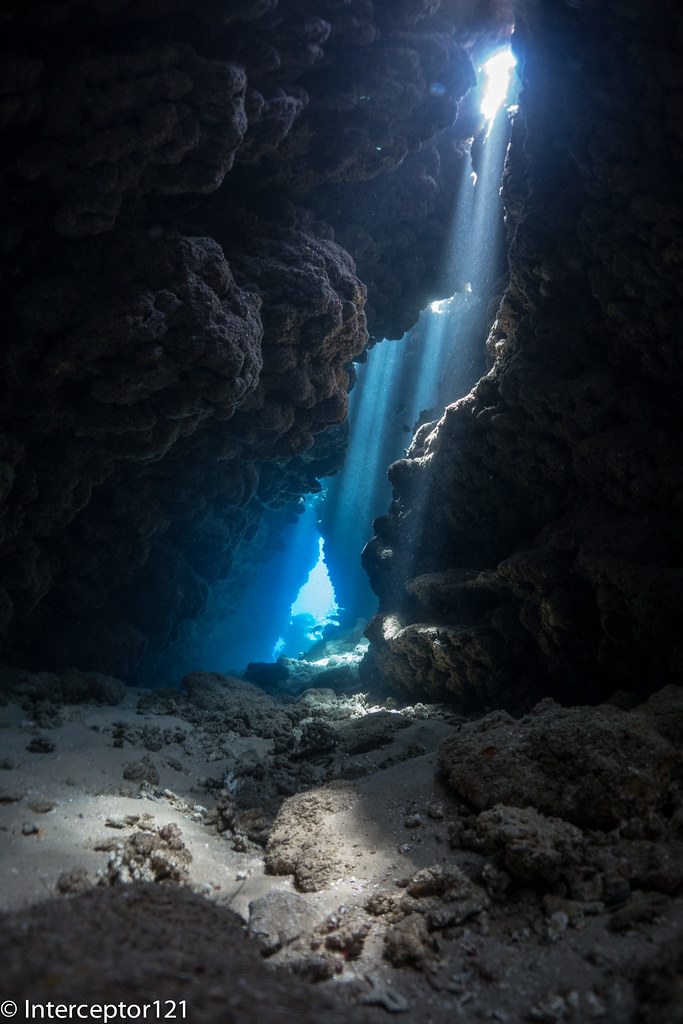 The shot is taken with the camera on the tripod using self shoot so that there is no shake from the hand pressing the shutter, this means the picture is sharp as it can be and due to low ISO also very noise free. Unfortunately fish did not feature in the shot so this is again a fairly technical shot that is not as strong as it could be.

There were other interesting opportunities in smaller cracks like this one that I like quite a lot though is not a sensational shot. 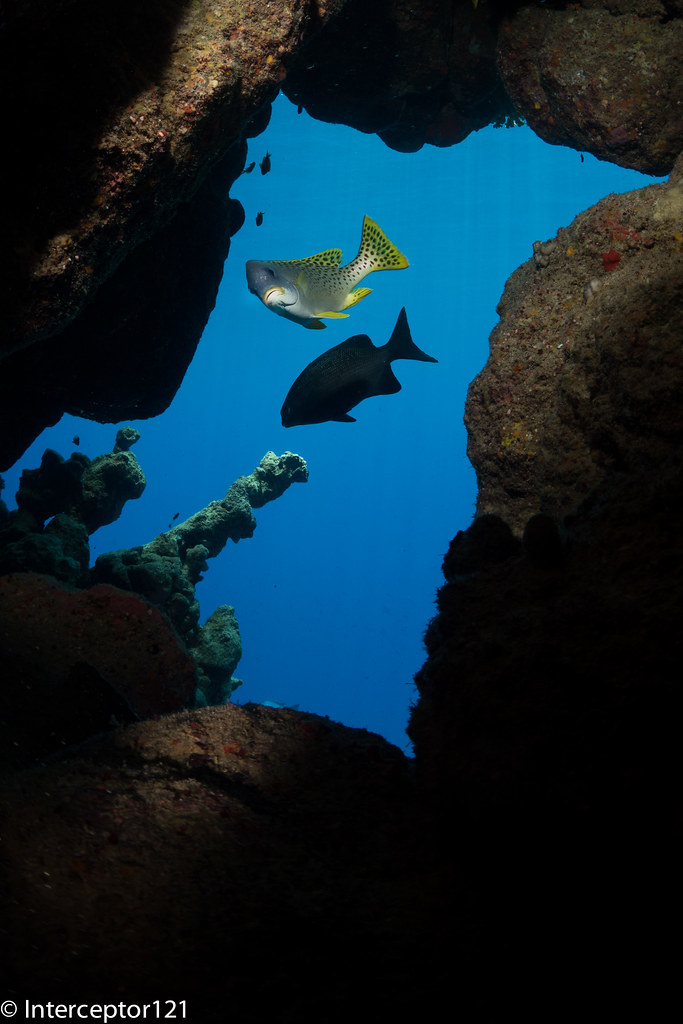 I like the fact that the two snappers are one silhouette and the other full color.

After the shambles of dive 2 we moved to Shark Reef where the first dive was really more to acclimatise with the site so won’t bore you with the pictures for that dive.

In the evening the sunset dive was at Ras Katy that would have been our regular evening spot from there onwards.

On day one I was playing with dapple light and reflections

This is me taking the shot above

As you can see I am nearly at the surface thanks to Damo for this picture.

Near surface can also be interesting like in this case

Here you can see part of the Snell windows together with the reef and the sunball. This shot can be made much more interesting if you focus on the reflections.

Anyway this was the end of day 3 of diving next post will be about Shark Reef and the schools of fish.