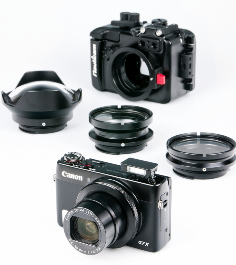 With the arrival of the new Nauticam N50 port system for advanced compacts I believe we say goodbye to using a large sensor compact underwater.

We already saw some signs when Sony released the RX100 Mark III with a 24-70mm equivalent lens, this effectively killed any use of the camera for macro. The new Panasonic LX100 has a similar problem with a 24-75mm lens but on top it has the new N50 port system in the nauticam housing or a severely limited functionality in the Ikelite version. It is obvious that the Panasonic LX100 will have similar sever limitations for macro but also with only 10 Megapixels really not be a strong competitor.

The last kid on the block is the Canon G7X, this camera looks very similar to the Sony RX100 Mark II and has a 24-100 zoom range that on land is very useful with an aperture of f/2.8 at tele end that is really interesting for land use. However this camera in the Nauticam version has the same port system N50.

So why has Nauticam introduced this? Both the Canon G7X and the Panasonic LX100 have fairly long lenses in terms of physical size and the zoom mechanism is such that the lens is retracted at wide end. This means that there is quite a gap between the lens and the port and wet lenses in those conditions have issues of both corner softness and chromatic aberrations. So Nauticam has introduced a short port with zoom blocked so that wet lenses can be used.

Effectively this is like diving with a fixed 18mm lens on your camera behind a dome with no zoom capability, taking the wet lens off results in horrible pincushion distortion so not really appealing.

The dome port does not allow the use of the full zoom at least without a diopter, so this is of limited use too for video.

Cost wise the new housing with the port system are around $1,200 in the US with additional $350 for the dome and $180 for the flat wide port. We are approaching the low end of Micro 4/3 Nauticam housing prices and are more expensive than Olympus OEM options but without the same flexibility and quality in terms of lenses.

It is clear that the Sony RX100 Mark I and II will remain one of a kind and this is the reason why they remain popular few years after launch.