I have mentioned the conditions we found in Galapagos in the previous post so no need to repeat myself.

One of the things I was told before going is that the last dive of the day tends to be pretty dark so not good for video, therefore I used this for photos were I was expecting to use strobes at all times.

I made a mistake as I should have taken the still rig also on the second cousins rock dive anyway I am quite happy on how things turned out considering I did only 4 dives and took 117 photos I am pretty happy I could pick 20 that I consider decent.

The whole set is here 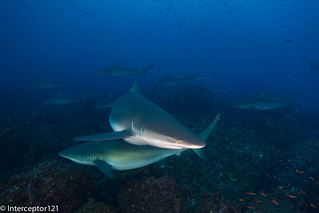 The rig I decided to pack at the end had 6+8 inches segment so it looked pretty cumbersome on land.

The reason why I took arms so long is that I was expecting sharks to be 4-6 feet away and quite a bit of particles in the water.

I was right. Just have a look at the following two shots, the first taken with a Canon S95 and a single 8″ arm.

You can see the considerable amount of backscatter despite the 1/1600 shutter speed.

This is another turtle on the same dive

This time two strobes on the longer arms are used, even at 1/320 this looks neat. The turtle looks bigger as the lens is not as wide as the previous, shooting distance is the same.

This is emotionally the best shot

Later on in the snorkeling trips I took couple of split shots.

Unfortunately the weather was not good and the sky cloudy so I had to play with the graduated filter.

The purist will notice that the water line is not neat, as I am shooting with a wet lens the back of the lens has water as well so to avoid to see that I shoot portrait with the back of the lens in the water, which is a limitation but on a good day will produce interesting shots regardless, also the lens is only 9cm diameter and is flat (Inon UWL-H100)

I took some close ups but even the sea horses were huge so no need for close up lenses.

The lens is at 35mm equivalent at the shooting distance I used the depth of field is only a couple of cm and as the background is quite plain I did not bother trying a black background that I could possibly not even achieve. This was a TTL shot whilst all the sharks and wide angle were taken with the strobes in manual.

Another great feature on land of the RX100 is the panorama, which I used in Bartolome and other places

In general the conditions were very difficult and I am happy with what I could achieve in just 4 dives.

I will be taking the same arms and strobes configuration to the Red Sea in a few weeks but with the Inon UWL-100 with dome. I expect better results as the conditions are usually fabulous in comparison, probably I could do with shorter arms but once in water the set up is not heavy so I will keep it like that