On Friday we were up for our last 3 dives at Shark Reef the current had not changed but this time I decided to give more a go to the schooling fish after setting up all the backgrounds I wanted.

As you can see from the image on the title we had more of the usual divers chasing fish but this did not deter me this time as I developed a specific technique to do the dive that I used fully on the last two photo dives.

So after a bit of experimental shots like this one

It was time to give it a proper go. To be honest is not that I like batfish that much and probably this is one fish that you can shoot in RAW in ambient light however if you do that you need to sacrifice quite a few ISO stops. With strobes the issue is to get the school in a formation that allows you to do a good job with lighting. This is my best shot for the session. 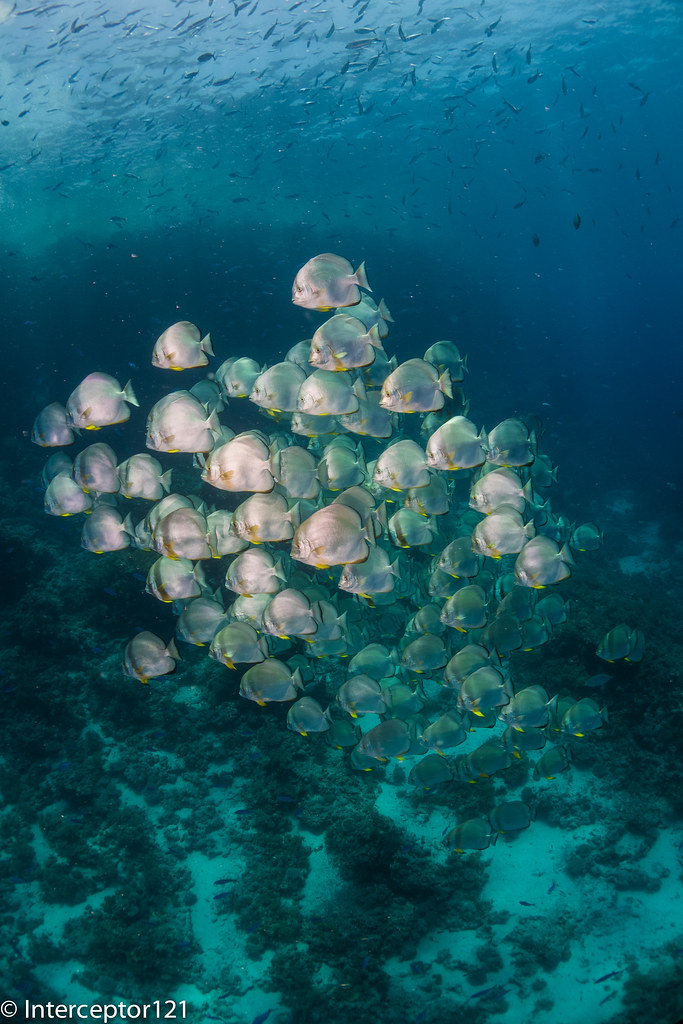 What I like about this shot is the light on the fish or most of it where you can see yellow fins but also the background and a hint of surface.

Other fish that featured on the day were jacks but catching a school of those running past is quite hard unless the school is really big and they circle you.

In those type of formation you have all sort of issues with hightlights form the strobes in fact I was shooting 1/4 of power.

Giant trevallies made a more interesting single fish shot like this one. 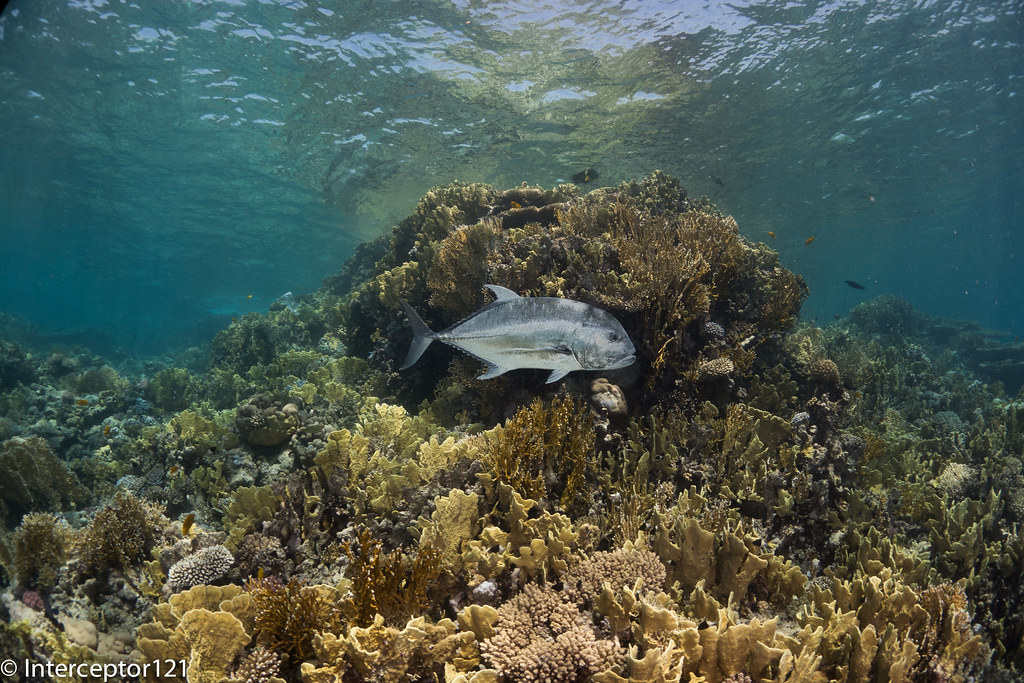 Contrary to what you may think this is a shot with strobes otherwise you would not see the texture of the fish as you see it. Maybe a busy background but good technical exercise. 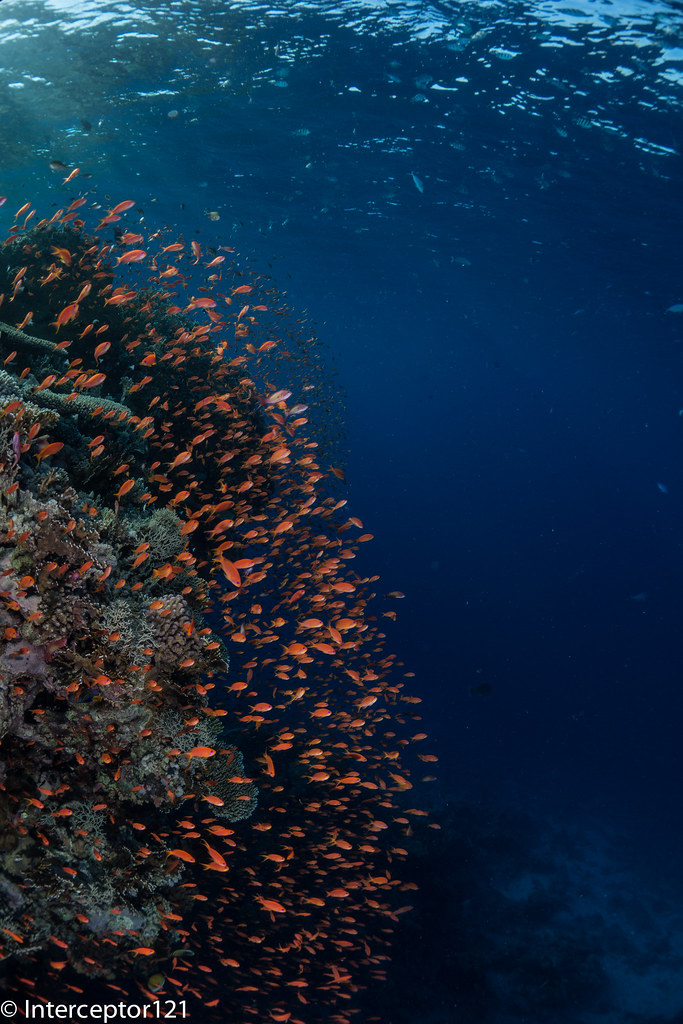 In the middle of the dives while I was waiting the barracuda school came out to play. Barracudas are quite tough as they require strobes to lit properly and I find the multitude of black and white shots that you see a bit boring as the fish texture is what makes the shot.

You have several challenges with the formation, if the school is big is difficult to take it all unless you are on the bottom or on the top. In the first case you need to control bubbles in the second you shoot the bottom so better be neat. 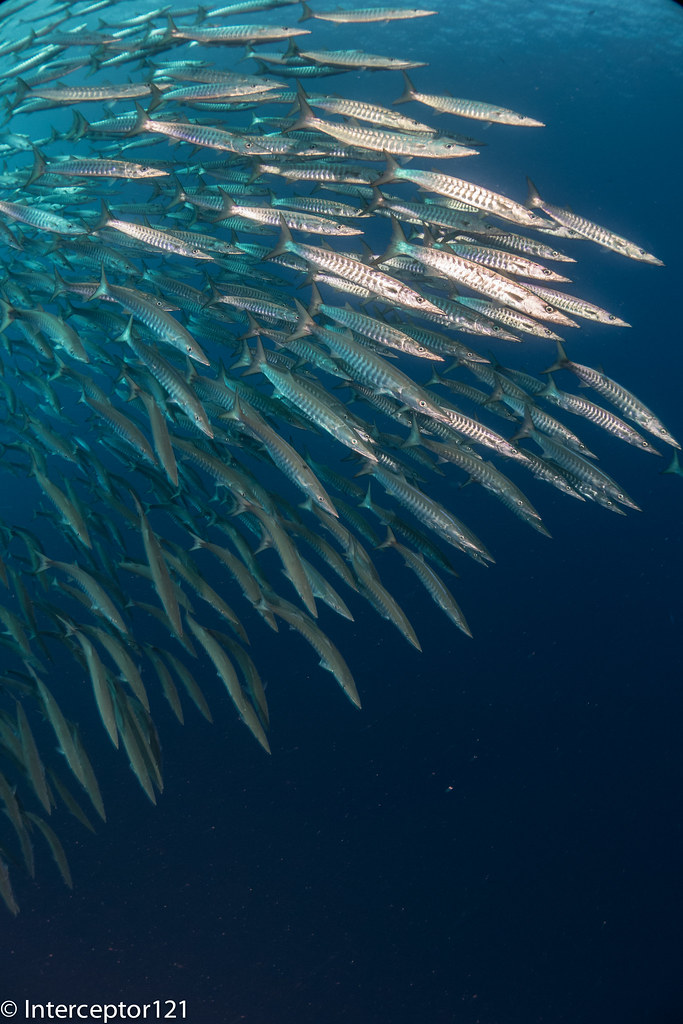 It is impossible to illuminate properly all of them but this shot has got the right geometry and I think is quite pleasant.

On the second dive I was lucky to spend some time with a Giant Barracuda that was literally commanding the school at sight, very rewarding from a diving point of view I got so excited that I kept shooting with a relatively slow shutter speed however the fish that is lit by the strobe is well crisp.

This shot is much deeper than the previous so the blue is colder but still makes for an interesting shot.

On dive 3 I decided to do a bit of video although I had not taken my favorite lens so I had to apply a filter directly on the camera lens. Moreover I had forgot the setting Toy effect on from some other experiment and whilst this is off in RAW it came back in video so the result is a soft warmer image…yuk still was fun to put it together so here it goes

It was time to rinse the gear (if you could call that hosing it quickly on the dive platform) and get ready to leave the day after. On the last day we were asked to put together a selection of our best 10 pictures and were give a video with some gopro footage taken by the ops manager plus our slideshow. Considering the time it was spent to do it the result is excellent.I hope this has given you an idea of the workshop that I definitely recommend, on the next post I will write my personal lessons learned from such experience.

Red Kite with prey
Caldecotte Lake at Blue Hour, this image is taken some time after sunset when the tones change from warm colours back to blue before complete twilight
Golden hour at Caldecotte. Enjoy our local parks. More to come
Different angle of Golden Hour at Willen lake this is a shot taken after sunset.
Rush Hour at Willen Lake
Gold!
Loading Comments...
Comment
×
%d bloggers like this: