After a few months of using the GH6 is time to answer the question pretty much every GH5 user is asking now.

The answer as always is … it depends. I hope this article will help you clarify your thinking.

I have done a number of tests on all the GH5 and GH6 series cameras including the original GH5, the GH5S, the GH5M2 and the GH6.

While many people talk about dynamic range most only care about noise and in particular if this will show in your footage or not.

Unfortunately read noise accurate calculation are only possible for RAW image files not video. Video has an additional issue which is temporal noise.

As noise is random by nature each frame will have its own noise and the changes in noise generate that flickering effect that everybody hates. This is called temporal noise and to an extent every camera has it.

Obviously if you have less noise you will see less flickering but all cameras will have some.

The other discussion that has been going on forever is that large pixels are better for low noise, this is also not true as more pixels can be added and noise averaged out. So the only thing that matters is sensor size, sensor construction and the sensor coating.

The original GH5 did not have a great coating so when the GH5M2 was released sharing the same coating of the G9 most people were saying well it won’t matter much while instead it does.

The benefit that the AR coating brings to the GH5M2 compared to the original GH5 is around 2/3 Stops which is not negligible.

The other difference among the various GH cameras is how VLOG is implemented.

In the GH5/GH5M2 VLOG is simply a curve and achieves no major benefit compared to other photo styles but it avoids you clipping highlights at expense of additional noise. This noise is managed overexposing 1 stop.

In the GH5s/GH6 VLOG applies underexposure behind the scenes of 1 and 1 1/3 stops so dynamic range is maximized. Both cameras have strategy to deal with noise. The GH5S applies noise filtering the GH6 scaling the net result is that VLOG in those camera is better than shooting something else.

Using a mix of read noise on RAW files and calculation of how noise is managed I have created the following chart that shows how noise goes at bit level when ISO goes up.

Here you can see all the cameras I think this graphic explains pretty much what happens at high ISO. For low ISO you need to take into account shot noise and my analysis is not able to evaluate that however this will make a small difference to the evaluations.

So lets go into the specifics

I am a hybrid user I want the best of both worlds which camera is better for me?

The GH5M2 is currently the best camera in this category, it offers the best still image performance, it has IBIS and video is very good and can be improved with an external recorder if you wish. It also records 8 bits which is fine for those who do not want 10 bits at all costs and uses SD cards. The dynamic range of a still image is the best of all GH series cameras as seen on photonstophotos. Remember that RAW files are not denoised or scaled like video.

I am a GH5 video user should I buy a GH6

Assuming that you shoot vlog because if you don’t any camera works just fine the answer is yes unless you are always at ISO 400 with your GH5 and do not want to buy more ND filter the GH6 is a significant step forward.

You need to evaluate however if you need all the GH6 offers.

While the GH6 performance is better than the GH5S in the high ISO zone at low ISO is worse. The GH6 has IBIS and all the features the GH5S has however it is limited to 12800. The GH6 also produces 25 megapixels photos but as a GH5S user this was probably not important.

If you don’t mind ND filters, use the camera in both daylight and low light and you need any of the features like 120fps 4k then the answer is yes.

The GH5 has been a very competitive camera and the GH5M2 further improved on it. The GH5S has its own niche and all of those are strong proposition. When looking at the GH6 the key criteria is that you are focused on video and that you need all the codecs and feature the camera has.

I think this video sums it up nicely

I have had the GH6 now for a bit more than one Month and it is time to get to conclusions in terms of the image quality in both photo and video.

In order to do that I have ran the GH6 side by side with the GH5M2 so far in my opinion the best hybrid Micro Four Thirds camera.

There have been a number of reviews online with regards to the GH6 video mode and for me two have stood out.

You do need to take into account a combination of factors when you look at video because the functionality and the camera image pipeline are what makes the video.

In general terms when it comes to functionality and codecs offered the GH6 is simply incredible. I have taken the opportunity to start bird video project and that would have not been possible with the GH5M2 or any previous GH series camera.

You can follow my work as it develops here

For the first time I am shooting in VLOG an entire project and this is due to the implementation in the GH6.

In the GH6 the implementation of VLOG is similar to what is done in the GH5s and the S series. So when you shoot in VLOG the camera is applying a negative adjustment of 1 1/3 stops behind the scenes.

This means when you are shooting at the 250 base ISO the camera is actually internally working at ISO 100.

In addition the GH6 no longer underexposed middle grey behind the scenes and it is spot on the grey card and in the RAW linear data.

In addition we now have a Dynamic Range Boost functionality that blends two frames one at High Gain and one at Low Gain to give you additional headroom in the highlights.

The result is that when you look at VLOG you have increased performance with dynamic range boost on from ISO 2000 and very strong dynamic range up to ISO 6400.

I have run some read noise tests using my astrophotography software and then applying the exposure shifts I come with the above result. Take into account that dynamic range in the GH5M2 is clipped on the highlights at 1 stop less so in reality although the graph seems to indicate that the GH5M2 at ISO 400 has more dynamic range this is not actually the case. However that is true is that up to ISO 1600 when the GH6 has dynamic range boost OFF the GH5M2 outperforms the GH6 in video.

I have shot side by side video and I will post on my YouTube channel some time soon.

However the first conclusion is:

What does this actually mean and how low light can you go? In practical terms f/2 1/60 ISO 1600 means 17 lux middle grey typical of floodlight buildings exteriors so not that dark but not that bright either. An indoor lounge with decent lights will have this level of illumination. Of course you can put a strong ND filter on the GH6 and enjoy more dynamic range however this has a number of other side effects.

The second conclusion is

So what is the use case that will definitely favour the GH6? Typically need for high quality high frame rate formats and decent low light performance. The camera does pretty well up to ISO 6400 in VLOG.

If you don’t use VLOG there is noise reduction in camera so although it looks clean the details is not anymore there. So personally I would use VLOG when possible with the GH6.

When it comes to photos the design choices of the GH6 backfire. The camera has incredibly high levels of read noise as per this graphic.

In addition the read noise is higher in the low ISO before it turns to ISO 800 when dual gain output is in action.

This has of course a direct impact on the theoretical maximum dynamic range.

Here you can see that at values up to ISO 640 the GH5M2 really has an edge and the improvement of the GH6 is really limited to the region between 800 and 3200 the benefit is modest at best 0.5 stops.

So the third conclusion is:

As an example those two images shot outdoor show that in effect our eyes do not really see read noise in a bright scene and once scaled the two camera cannot be taken apart. However if you had shot a long exposure at low ISO you will see grain with the GH6 under ISO 800.

For how hard I try I could not tell the difference between the two images above once processed and scaled.

Final disclosure all my figures look at pixel level noise and dynamic range. Scaling to a common size as shown by the image above will benefit the GH6 more as it has higher resolution but the difference is no so large that the data above is not valid so in general all I said above holds.

I have provided test files to Bill Claff of PhotonstoPhotos and he will publish more reliable and scientific results in due course.

We are both puzzled by the GH6 design and are waiting for another raw converter support to reconfirm however the triangulation of my data with other sources holds so I am quite confident of what I wrote here.

GH5M2 and GH6 Lag between LCD and HDMI

Video Tutorial with my recommended settings

Items shown in this video 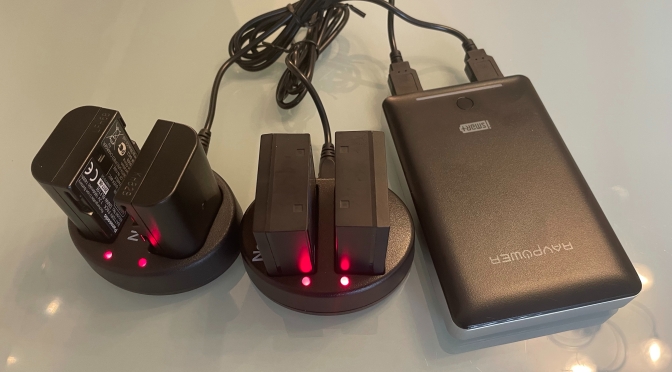 The GH6 has the same USB power capabilities introduced in the GH5M2.

In this video I show you what I use with my cameras.

Initially with the GH5 I could only use a dummy battery kit and this will continue to work however it may have challenges with mechanical shutter or very high bitrate codecs of the GH6.

Therefore the recommended solution is a PD Power Bank

I was able to have a 1 hour hands on session with Lumix yesterday and try some of the GH6 features.

My recommendations for a professional grade housing would be:

For photography a classic housing would work but then who is going to get this just for photos?

Stay tuned for more information. If there is something you want to know about the camera use the comment feature here.